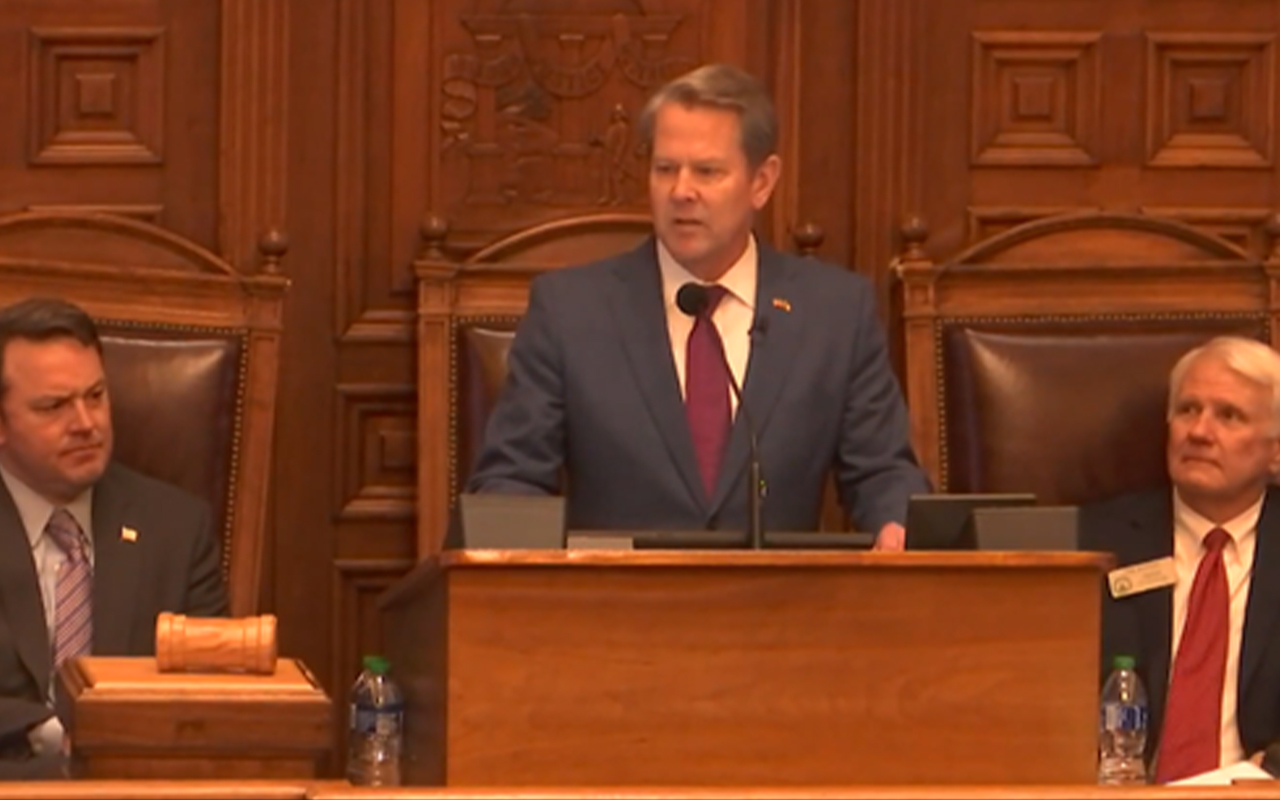 While the rain may have saturated the grounds on Wednesday morning, it did not slow activity at the State Capitol. The halls were packed with groups from all across Georgia as well as constitutional officers, judges, agency heads, and others from the universe of State government. All were assembled to hear Governor Kemp deliver his annual State of the State Address, the fifth of his administration. The Governor used his address to recognize the challenges overcome in his first term while charting a course to support education, fight crime, improve healthcare, and strengthen Georgia’s workforce during the current legislative session.

Following the Governor’s remarks, committees shifted into gear with several holding organizational meetings ahead of the real work getting started. More on Governor Kemp’s address and the committee meetings in this #GoldDomeReport.

Governor Brian Kemp delivered the first State of the State Address of his second term on Wednesday. Acknowledging the challenges overcome by hardworking Georgians during his first term of office, Kemp proclaimed that the state of our state “has never been more resilient.” The Governor also laid out his vision for the legislative session ahead, calling it “a session of consequence” as he pursues his goal of setting Georgia on a “path of greatness for generations to come.”

Governor Kemp’s plans for the session, as set out in his remarks, fall into four broad categories: supporting education, fighting crime, improving healthcare, and strengthening Georgia’s workforce. On the education front, Kemp heralded the $1.9 billion in additional funds proposed for public education in his budget proposals, which includes $2,000 raises for educators. The addition of this $2,000 will mean teacher salaries have been increased by $7,000 in five years, which, according to Kemp, puts Georgia’s teacher salaries $7,000 higher than the Southeastern average. Kemp also promoted his plan to provide grants to help paraprofessionals with college degrees see teaching certifications, which he said could add 5,000 teachers to Georgia classrooms. This is on top of returning HOPE Scholarships and Grants to cover 100% of student tuition.

Kemp also discussed his plans to advance his fight against crime and stop the “revolving door” of criminal justice. The Governor announced his plan to offer legislation to increase criminal penalties for those who try to recruit children into gangs, proclaiming: “Come after our children, and we’ll come after you.” He also recognized the work of First Lady Marty Kemp and the GRACE Commission in the fight against human trafficking, promising increased penalties for those who support traffickers.

On the healthcare front, Governor Kemp continued to dismiss prospects of Medicaid expansion, instead heralding the increased insurance coverage under his policies. However, he did propose legislation that will allow pregnant women who qualify to receive TANF benefits. Additionally, he reaffirmed his commitment to strengthening the health workforce with $4.5 million in loan repayment for healthcare workers, $1.7 million for 102 new residency slots.

Finally, on the general workforce front, Kemp detailed his Rural Workforce Housing Fund, which will allow the State to partner with local governments to develop sites across the state for workforce housing.

The full text of Governor Kemp’s address is available here.

The House Regulated Industries Committee met for its organizational meeting on Wednesday afternoon. Chairman Alan Powell (R-Hartwell) opened the meeting, having all the members make introductions outlining more about their districts and leadership positions. The Chairman noted some of the business interests in the state were missing today but then corrected things to say it was quality before quantity! The Japan Consul was present for the meeting - a large trading partner with the state. Former Representative and Chairman of the House Ways and Means Committee Brett Harrell was recognized. The badge of honor, a lapel pin, for the Committee will be provided to all members. Jan Brown is administrative assistant to the Committee and Chairman Powell. Brian Heinze is Committee analyst. Shawn Marie Story is legislative counsel along with Clair Bryan and Nick Tate.

Everyone has a right to be heard per Chairman Powell. Many bills will have consequences but there may be some unintended consequences with legislation. He urged members to be cautious in making commitments. He also stated he would not tolerate individuals being abused or threatened.

According to Chairman Powell, alcohol and tobacco always comes to this Committee. Occupational and professional licensing generally come to the Committee. Cannabis, a recent issue, comes to the Committee but is in disorganization and those issues come to this Committee. Gaming also comes to the Committee, and Chairman Powell reminded of the constitutional prohibition against gambling. He reiterated his belief that a constitutional amendment is necessary to allow gambling. He reminded that no member of legislature legalizes gambling, members of the General Assembly have the opportunity to put the issue on the ballot.

Chairman Chuck Martin (R-Marietta) opened the first committee meeting of the year on Wednesday with the approval of the committee rules. He then recognized Chancellor Sonny Purdue from the University System of Georgia for a presentation. The Chancellor quickly highlighted some of the points he made in last week's budget hearings, including the new partnership between Augusta University Health and Wellstar and funding requests. He emphasized the new career resources planning platform and provided the historical context of their funding which informs their current funding requests.

Technical College System of Georgia Commissioner Greg Dozier presented and explained one of his top goals is to close the skills gap. With 22 colleges and 88 campuses across the state, 44% of their students are first-generation college students. Commissioner Dozier also highlighted his budget requests.

The Governor’s Office of Student Achievement (“GOSA”) was created by then-Governor Purdue. Executive Director Joy Hawkins explained their office works on student success and focused her presentation on their data system. GOSA walked the Committee through some of their dashboards. Chairman Martin expressed interest in having them return to give a more in-depth presentation.

Since the committee was unable to hear all the presentations due to time constraints, Chairman Martin planned to continue these conversations and discuss a few bills next week.

The Senate Higher Education Committee met on Wednesday for an organizational meeting. Chairman Billy Hickman (R-Statesboro) had Committee members introduce themselves and provide some background on higher education institutions in their districts. The Committee adopted its Rules for the session.

Senator Brandon Beach (R-Alpharetta) indicated he wanted the Committee to look more closely at how institutions of higher learning utilized search firms for positions (such as presidents, provosts, etc.) and how schools could utilize succession plans for some of these positions. His concerns are the amounts of money being expended on search firms. Chairman Hickman asked the Committee to review the NPEC Annual Report which was shared with members. No other business was discussed.

Chairman Ben Watson (R-Savannah) and Chairwoman Kay Kirkpatrick (R-Marietta) presided over the joint committee meeting and focused on foster care and the hoteling of children.

Dr. Michelle Zeanah noted the first problem is the lack of a full and comprehensive diagnostic evaluation. Autism affects two percent of Georgia’s children according to the CDC. Licensed Professional Counselors are not able to diagnose, and the reimbursement rate is very low. The second problem is lack of early intervention. The third biggest problem is crisis intervention services are not readily available. Either they are too late or do not come at all. Some families are directed to law enforcement, who are not qualified or knowledgeable to deal with these interactions. When families go to Emergency Rooms, they have to wait for a crisis bed. Dr. Zeanah suggested investing in care coordination. For foster children in crisis, she suggested doing the prior authorization after services are provided similar to emergency situations. This could prevent languishing. We need to evaluate if managed care is effective. Additionally, Dr. Zeanah recommended loan repayment options and financial incentives.

Ms. Audrey Branon, a Licensed Clinical Social Worker, provided context to the discussion with examples of children with complex needs. She explained that issue is not with the Department of Family and Children Services but with the whole system. Mr. Bryan Patterson, an attorney at the Department of Human Services, is responsible for representing foster children who are denied by Family 360 so they receive the medical care they need. His office frequently reviews medical treatment denials. Mr. Patterson felt the current system does not meet the needs of the children and falls short of the government's obligation.

Judge Render Heard agreed with the speakers who came before him on this issue being a systemic problem. He shared a story about a child who came before his court. He felt the state needs to develop some placement, which are not RYDCs.

Mr. Mike Dudgeon started his presentation by outlining that his journey began in 2016 with the state’s foster care system. For the children his family has fostered, finding a provider in-network with Amerigroup was difficult, and they often paid out of pocket for services when services were denied. In a working group, Mr. Dudgeon explained that when with Lt. Governor Duncan’s office they researched Amerigroup’s denial rates and other data relating to foster care and hoteling. In 2018, Georgia paid $130 million for capitation rates with Amerigroup paying $69.5 million in claims. This means a 35% profit rate. Mr. Dudgeon felt money is not being spent appropriately. Overarching themes of his presentation were issues with responsiveness and access to data. Mr. Dudgeon suggested a few ideas: putting foster children on the state health benefit plan, moving the fee for service, improving transparency with more data from the providers, and requiring that the new CMO contracts, including the one with foster care children, require some of these suggestions.

A number of people for Amerigroup stood up to speak: Nick DeJong, the Government Relations representative for Amerigroup, Beveany Slonkey, a Licensed Professional Counselor, Dr. Vanderlyn Sewell, a Licensed Psychiatrist, and Mel Lindsey, the Amerigroup Georgia Plan President. They spoke of their processes and goals of ensuring access to care for their consumers. The committee members asked for access to de-identified data which the representatives agreed to provide.

The joint committee meeting was still meeting as this report went to print.

The following legislation of interest has been introduced in the House:

The following legislation of interest has been introduced in the Senate:

The General Assembly will reconvene for Legislative Day 8 on Thursday, January 26 at 10:00AM.