The House and Senate Appropriations Committees reconvened on Monday for another special Joint Meeting in light of the COVID-19 budget environment. During Monday’s meeting, members of the committees heard from representatives of the National Conference of State Legislatures about how federal coronavirus response funding has been allocated to Georgia through various spending programs and allowances. Find a recap of their testimony and members’ subsequent questions in this special edition of the #GoldDomeReport

Chairmen Terry England (R-Auburn) and Blake Tillery (R-Vidalia) opened Monday’s meeting by explaining that they hoped members find the information valuable.  Additionally, they indicated that they wished to keep them abreast of the variety of ways money is being used to combat the crisis.

Molly Ramsdell, Director of the NCSL DC office, started out with some background on the three main coronavirus response packages passed by the federal government. Ms. Ramsdell also noted that this presentation would focus primarily on the CARES Act through which Georgia was granted about $8.2 billion. Overall, there is little flexibility in how these funds can be spent although a few specific programs allow governors limited spending discretion.

Erlinda Doherty provided information about the Coronavirus Relief Fund, or “CRF”, which provides reimbursement funds for coronavirus-related spending by states. Georgia has been allocated approximately $4.117 billion for these expenses. Federal directives require this money be spent exclusively on COVID-19-related expenses and do not permit any use to offset lost revenue or predicted revenue shortfalls. 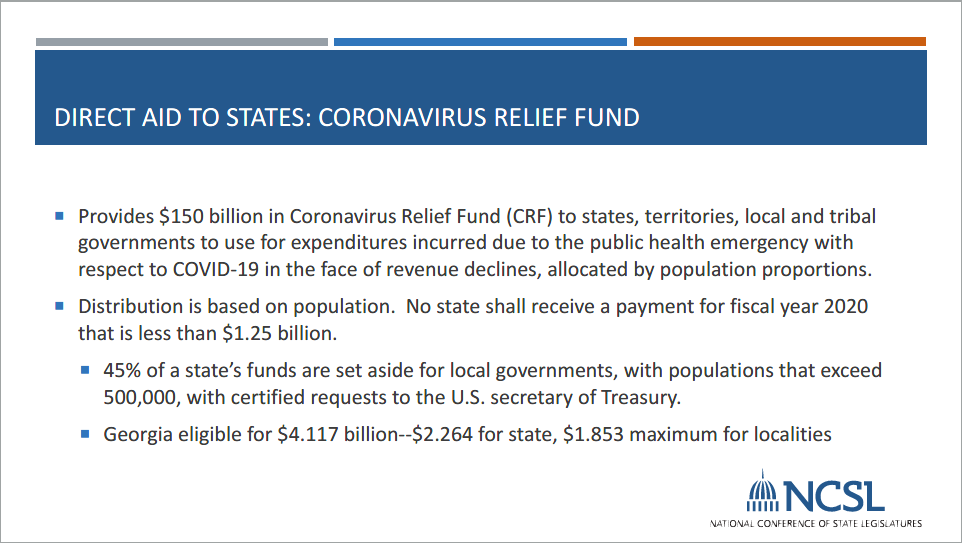 Austin Reid then provided the committees with an explanation of education allocations under the CARES Act. As of last week, Governor Kemp had still not received the $105.7 million allocated to Georgia for the Governor’s Emergency Education Relief Fund, but the application period remains open until June 1, 2020. These funds are the most flexible of the relief packages, allowing Governor Kemp to allocate resources to any education-related agency in the state. The state also received $401 million and $437 million for higher education and elementary/secondary education, respectively. The higher education funds contain a requirement that half of all funds received be used for student emergency fund payments. The Georgia Department of Education has already received its money; allocated based on Title I funding. Within the K-12 funding stream, a few pending requirements remain muddled at the federal level including a possible waiver for the maintenance of effort requirement if a state expects significant budget shortfalls. Some states have also disputed the U.S. Department of Education’s interpretation of the equitable services provision, although Georgia appears poised to follow such guidance at this point. 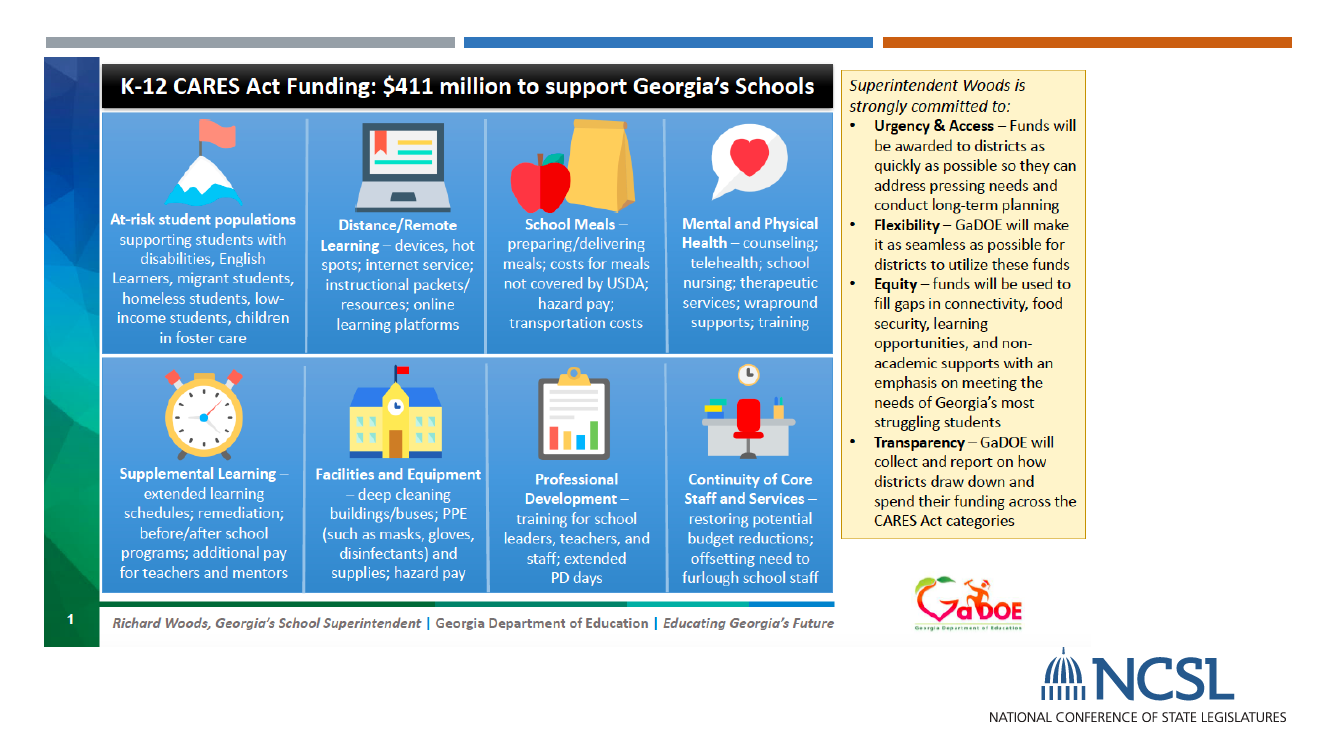 Ben Husch explained how funding sources like the PPP and Economic Injury Disaster Loans are being allocated for agriculture, with a second round of relief expected for farmers in the near future.

Jon Jukuri gave a quick overview of national labor statistics including a 1,292% increase in unemployment in the last month. Georgia is currently ranked second in the nation for processed claims; falling short of only Kentucky. The exact reason for Georgia’s large number of processed claims has not been elucidated by data.

The drastic increase in unemployment claims can be seen in this chart: 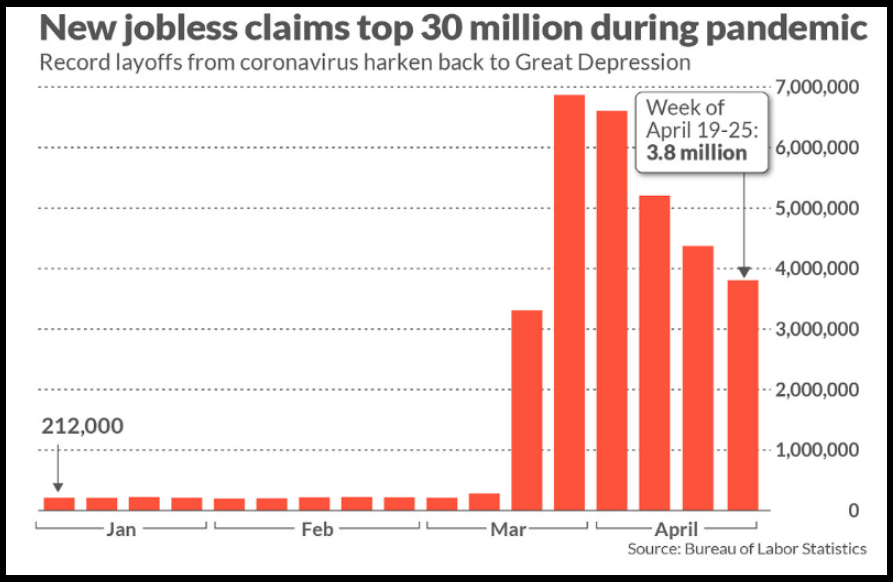 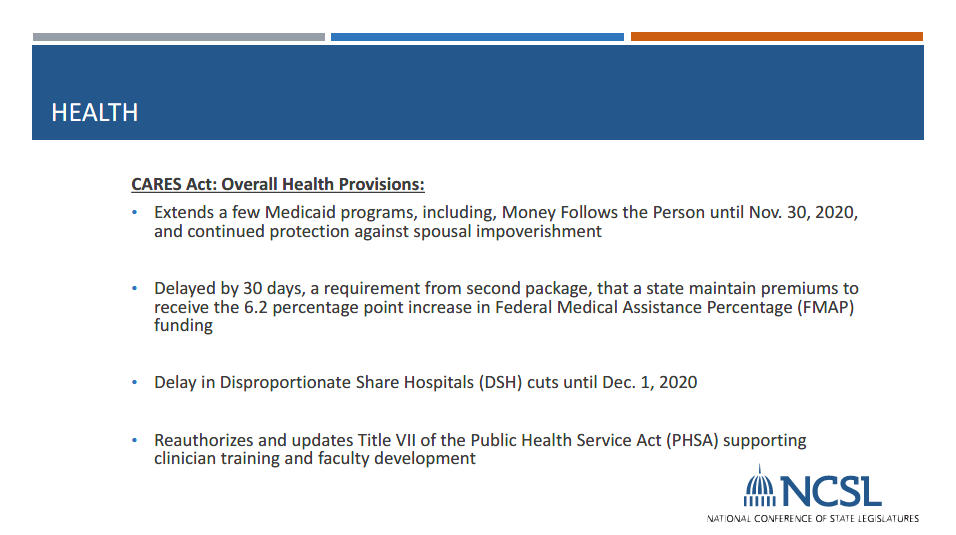 The complete NCSL presentation slides can be found here.

Chairman Terry England facilitated a brief question and answer period as members submitted questions to him. A few of these questions and answers have been highlighted below:

Has there been any discussion about extending the COVID-19-related spending deadline past December 30, 2020?
There has not been too much discussion on this point on the federal level although some states have wondered about the arbitrary date of December 30 which does not coincide with any state or federal fiscal years.

Are DSH payouts delayed until December?
Only DSH cuts are delayed, not the payments.

Will each school district be required to apply for funding or will funds be applied through a formula?
The GADoE has yet to finalize their application but generally the funding is based on a set formula.

Will individual school districts that use testing programs for students before returning to school be eligible to receive funding for this purpose?
While no specific program for this purpose has been discussed, states might be able to use discretionary funds to cover these costs.

Both chairmen encouraged members to submit any additional questions and thanked the representatives of NCSL for their time and information.