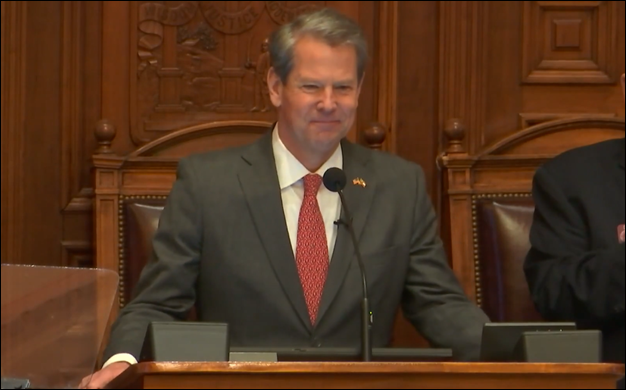 Following a teaser at the Eggs & Issues breakfast on Wednesday, Governor Kemp threw open the curtain on his policy platform and budget proposals in today’s State of the State address. As expected, there was much money to go around, and the Governor proposed that it be spread liberally, from paying the final installment of his campaign-pledged $5,000 teacher pay raise to infusing cash in the healthcare and law enforcement talent pipelines to providing for a 10% provider rate increase to the foster parents, relative caregivers, child caring institutions, and child placing agencies caring for Georgia’s neediest children. Governor Kemp also detailed several of his policy proposals, including supporting legislation to protect public school students from “divisive ideologies” and adding human trafficking to the list of serious violent and sexual offenses that require a superior court judge to grant bail. A full recap of the Governor’s address (and link to the text and video) are inside this #GoldDomeReport.

Governor Kemp also released his proposed Amended FY22 and FY23 Budget Reports on Thursday. The full Reports are available online, and we will have analysis of key budget areas in Friday’s Report.

DID YOU KNOW that, in addition to our daily Report, our Georgia Government Relations Team provides real-time updates on action under the Gold Dome on Twitter? Follow our team members, George Ray, Helen Sloat, and Olivia Buckner, and our hashtag, #GoldDomeReport, for updates throughout the day.

Building on the themes of building, planting, and playing football from his previous three speeches, Governor Brian Kemp delivered his fourth State of the State address on Thursday and telegraphed the clear message that, over the past three years, his administration has proven “it can be done.” Governor Kemp described the “it” as he laid out his budget and policy priorities for the 2022 Legislative Session, which focused on education, healthcare, and public safety. He recognized the progress his administration has made in these key areas, despite adversity and challenges, and set out his next steps in his continued efforts to “put hardworking Georgians and their families first.”

Governor Kemp also discussed his education policy priorities for 2022, which will include a parental bill of rights and legislation to “ensure fairness in school sports and address obscene materials online and in our school libraries.” According to the Governor, these policy proposals are aimed at “protect[ing] our students from divisive ideologies.”

Turning to healthcare, Governor Kemp touted his Patients First Act from 2019 and its impact expanding choice and increasing savings for Georgians buying health insurance. He then shifted to new proposals to expand the health workforce, including $1 million to the University System of Georgia to expand nursing programs and funds for the Technical College System of Georgia to grow allied health partnerships. His budget proposal also includes $2.5 million for 136 new residency slots and $1 million for Mercer University to work to address rural physician shortages. Governor Kemp emphasized his goal to add 1,300 health practitioners across the state.

Governor Kemp finally turned to public safety. After pledging support for constitutional carry legislation, he proposed new legislation allowing the Attorney General to partner with the GBI and local law enforcement to prosecute criminal gangs. The Governor also proposed funding for an additional class of State Trooper candidates and to offer free tuition for over 1,000 Georgians seeking to enter law enforcement with training through the Technical College System of Georgia. In a nod to the First Lady’s Grace Commission, Governor Kemp committed his support to legislation adding human trafficking to the list of serious violent and sexual offenses that require a superior court judge to grant bail.

The Governor closed his remarks with a renewed message of his intent to put Georgians first with a “bold, conservative agenda”. That agenda, in the Governor’s words, “turns promises made into promises kept."

The full text of Governor Kemp’s address may be accessed here, and video of the remarks are available here.

The following legislation of interest has been introduced in the House:

The following legislation of interest has been introduced in the Senate:

The General Assembly will reconvene for Legislative Day 4 on Friday, Jan. 14, at 10 a.m.